Home > Blog > What Do Termites Look Like in Forney 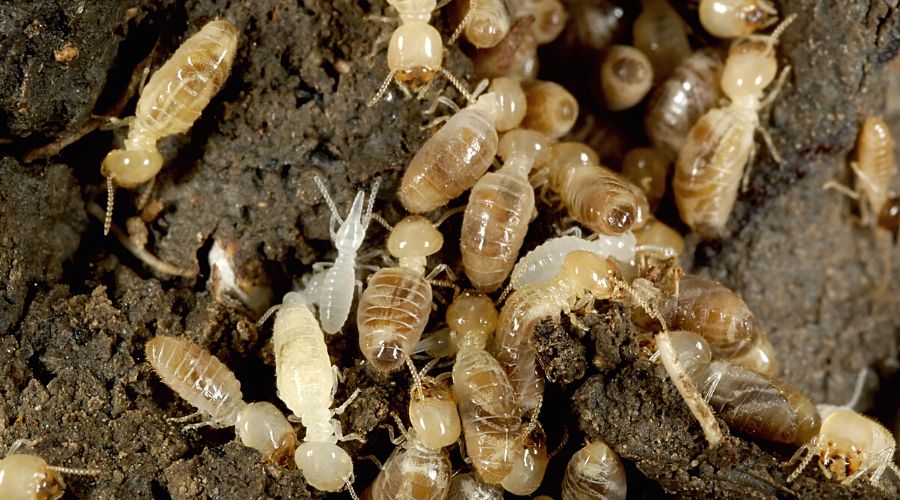 As a Forney resident, your home or business is at risk of termite damage that can easily total thousands of dollars. The tiny wood-eaters compromise the structural integrity of any building they infest. On top of this, termites often go unnoticed because people aren’t familiar with their appearance, allowing for more time to inflict damage!

So, what do termites look like? Here are some things that Forney residents can look out for to avoid a termite disaster.

How to Identify Termites

Considering the potential risk to your property, it’s wise to regularly investigate for a potential termite problem, and knowing what to look for is the first step in doing so.

There are over 40 species of termites found in the United States. Thankfully, they all share similar characteristics. Most are about a ¼ – ½ inch long, and they have straight antennae. They can range in color, so look for a white- or light-brown-colored bug. Some termites, called reproductives, have wings. Termites are routinely mistaken for ants and vice versa.

All too often, termites go undetected while they damage your property. It’s important to keep an eye out for what termite damage looks like in addition to the termites themselves.

If you notice any of these signs, call a pest control company right away.

According to the United States Environmental Protection Agency, the most prevalent termite variants in the country are Subterranean Termites, Formosan Termites, Dampwood Termites, Drywood Termites, and Conehead Termites – all of which can appear in Texas.

Subterranean Termites are the most common termites in Texas. These pests build underground mud tubes and they live in colonies that can have up to two million total termites. They’re also far more destructive than other species: they’re capable of collapsing entire buildings over time.

This species of termite can be ivory-colored or a darker shade of brown. Subterranean termites are also smaller than other species, about ⅛ inch in length, and they have six legs.

Formosan Termites can be found in most southern regions throughout the United States, including Texas. They look very similar to Subterranean Termites, but there are some subtle differences.

Formosan termites can vary from creamy white to brown, they’re about half an inch long, and their body shape is long and narrow. They also have swarmers known as “flying termites” that can sometimes be confused with ants.

Dampwood Termites are more common in the desert and semi-arid areas around Southern Florida and nearby states. However, they do appear in coastal areas of Texas and could be spotted in Forney. They have a creamy white to brownish color, they have long, narrow bodies, and their body size varies from half an inch to ⅝ inches long.

While not as populous in Texas, these termites pose an equally fearsome threat. Drywood termites can nest in semi-dry, undecayed wood like your wooden furniture. There are some subtle differences between them and other species. Look for light-colored (white or brown) bugs with six legs. They will measure ⅜ to 1 inch.

You probably won’t see Conehead Termites in Texas. They’re mostly confined to areas around the Caribbean and Panama. However, they have been spotted in Florida, so they could appear in Texas too. Their body is around ⅛ of an inch long and they tend to be cream-colored with dark brown heads.

Termites rack up more than $5 billion in damages to homeowners and business owners alike in the United States each year, including those in Forney, Texas. Their colonies can last seven to ten years and contain millions of termites, so even if your termite problem seems small that doesn’t mean it’ll stay small.

For that reason, it’s important to know what termites look like in Forney, so you can identify them and report them to our qualified and friendly team of experts. We’re here to help. Call Romney Pest Control today at (214) 273-1785 for a free quote!