Home > Blog > What Do June Bugs Eat? Learn Their Diet, Life Cycle, and How To Stop Them

What Do June Bugs Eat? Learn Their Diet, Life Cycle, and How To Stop Them 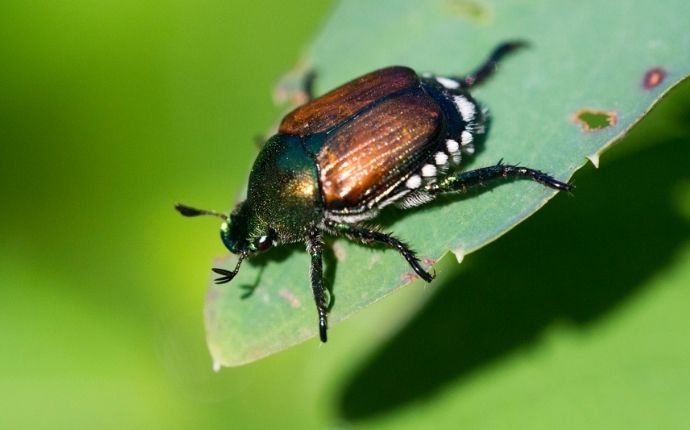 June bugs may not seem like a very big deal- unlike other insects, June bugs don’t bite or sting, and they can typically only be found at night. Of course, that doesn’t mean we want them running rampant around our homes. While a June bug won’t hurt you, they do have eating habits that are harmful to your lawn and your plants. If there are a lot of them, their presence can become quite destructive. So how do we get rid of June bug infestations? Let’s find out…

June Bugs: All You Need to Know About These Pesky Critters

June bugs are native to North America, Europe, and Asia, and go by many different names. There are several common types of June bug; the most common species of June bug in the United States are the Common June bug, the Tenlined beetle, and the Green fruit beetle.

All About June Bugs

Learning more in-depth details about June bugs can help you nail down a pest control solution. Let’s take a closer look at these insects.

Where Do June Bugs Come From?

June Bugs are very common bugs found in the Northern Hemisphere. Specifically, they hail from North America, Europe, and Asia. These insects enjoy the warmer weather, so they are attracted to warm areas during the summer. They are especially attracted to thick lawns with thatch. In fact, heavily fertilized lawns serve as an especially hospitable environment for June bug grubs.

The Life Cycle of June Bugs

The life cycle of the June bug begins early in the summer during mating season. A female June Bug will lay her eggs in multiple groups for a total of up to 200 eggs for the season. To keep the eggs safe, she typically places them two to ten inches below the surface of the soil.

The eggs only need two to three weeks to mature. They then hatch and come up out of the soil during the summer when food is most plentiful. This is the first of three instar stages, in which the larvae grow and shed their skin to accommodate their increasing size.

June bug larvae, or grubs, feed on decomposing organic matter and roots, killing plants from the bottom up. In the second instar stage, June bug larvae are their most destructive, requiring larger quantities of food to support their growth.

Upon entering adulthood, June bugs are free to move beyond the roots and grass they were previously feeding on and attack other nearby plants. Adult beetles will become active during the late spring and will remain so until mid to late summer.

June Bugs are usually inactive during the day. During the evenings, they become more active and are drawn to light sources. The most common kinds of June bug range from half an inch to an inch in length. They are reddish-brown and have shiny wings. Though tiny creatures, their bodies can be described as heavy and oval-shaped.

While the different types of June bug are all very similar, they do have some differences worth noting.

The Common June bug is the type that most closely matches the above description. These bugs, often called May beetles, are reddish-brown and are between one-half and one inch long. They sport the same hard, shiny wing covers.

Otherwise known as Rhizotrogus Majalis, the European Chafer Bugs are smaller than common bugs. They measure just about a half-inch and love to burrow out in turf and lawns.

The Green Fruit Beetle has a fun nickname: the fig-eater. This metallic green insect enjoys soft, ripe fruits like figs and is very common in the eastern United States.

The Green June bug is named for its rich green color. Its upper body is smooth and velvety, and it boasts stripes along its wings in colorful shades of green, orange, and yellow.

Also known as the Popillia Japonica, the Japanese Beetle is a smaller June Bug that has brown wings and a metallic green-blue head. It also sports clumps of white hair that uniquely grows down the side of each leg.

With distinguishing features of its own, the Tenlined June Beetle is one of the largest types of June bug, growing up to an inch and a half long. The brown tenlined beetle has ten distinctive white stripes that run the length of its body, which is how it got its name.

June bugs commonly cause damage to your lawn, foliage, and fruits or vegetables, but different species will have different preferences for food. For example, the Japanese beetle enjoys feeding on common crops, such as strawberries and peppers, while Common June bugs are content to continue feeding on your lawn or on nearby trees or bushes.

As mentioned above, June bug larvae are especially dangerous for your lawn. If an infestation is really bad, the larvae can eat through large sections of grass, leaving your yard looking brown and dry.

Signs That You Have a June Bug Infestation

There are often clear signs that indicate you have a June bug infestation. These red flags can let you know that it’s time to take action.

Perhaps one of the most obvious signs of an infestation is seeing the bugs for yourself. If you’ve started to notice large flying beetles becoming active after dark during the summer evenings, this could be an indication.

Because June bug larvae live underground and feed on roots, you may begin to notice sections of your lawn dying and turning brown. You may even be able to easily lift sections of brown grass straight from the soil.

While grubs stay underground, adult beetles feed on above-ground plants on your property. So, you may start to notice leaves with jagged holes and a torn-up appearance.

How to Get Rid of June Bugs

Any kind of infestation can seem overwhelming, but there are a few simple ways you can get rid of June Bugs fairly easily.

It’s not necessary to use harmful chemicals to get rid of June Bugs. Using Bacillus thuringiensis var. Kurstaki, commonly known as BT, is an organic and non-toxic way to get rid of grubs in your lawn. You can also use dish soap to kill grubs in the lawn, as it works to suffocate them. You can dish soap with water and spray it all over your lawn.

Another way to get rid of infestations is to create June bug traps to capture the adult bugs. Set up a container filled with fruit juice with a wide-opening funnel at the top. The adult bugs will go for the juice, trapping themselves inside.

Other natural predators such as frogs, snakes, and lizards can help control the population. You can keep some of these non-harmful animals in your garden to protect your plants.

The best way to beat an infestation is to prevent one altogether. Maintaining an overall healthy lawn is the first step to preventing June bugs. During late June, when females are trying to bury their eggs, try irrigating your lawn frequently. You can also try overseeding your grass to encourage new growth.

While June bugs can be quite obnoxious pests, they aren’t harmful to humans – so there’s no need to panic if you find them in your yard. These bugs don’t bite, and they are actually fairly easy to manage.

The greatest damage you’ll likely see from a June bug is damage done to your lawn. But, you can treat an infestation easily – and without using any harmful insecticides or chemicals.

Romney’s Pest Control has been servicing the Dallas-Fort Worth, Austin, San Antonio, and Houston area for over ten years, offering top-of-the-line treatments and pest control services. If you’ve got an insect problem, we have a solution.