Home > Blog > How to Kill Spiders: 4 Easy Methods You Can Do Right Now

How to Kill Spiders: 4 Easy Methods You Can Do Right Now 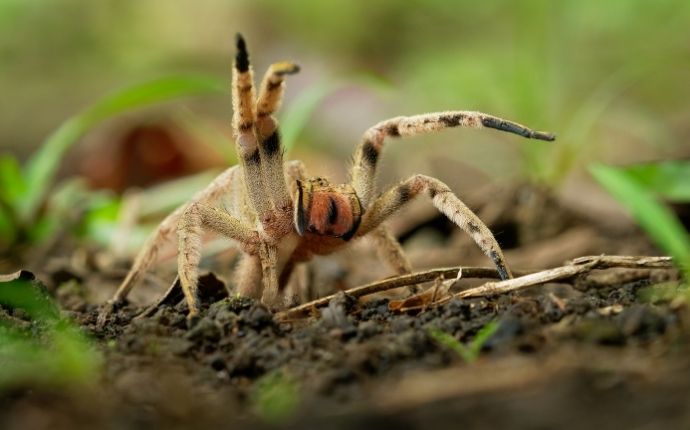 Despite the general disdain for spiders, homeowners should think twice before killing them. While they can bite, many household spiders do more good than harm. It’s not uncommon to find a spider in the house, but these eight-legged creatures prefer to be outdoors. Spiders enter our homes to find shelter and a food source, especially if you have ants or flies in your home. Since spiders eat smaller insects, they can help remove those unwanted creatures from your home.

Most small spiders that enter your home are harmless, but a few, like the brown recluse or the black widow spider, are dangerous, especially when threatened. Even though most spiders are harmless to humans, many people have a fear of spiders. In fact, studies show that just under 20% of men and 50% of women fear spiders. This alone is enough for people to want to get rid of spiders in their home.

Though spiders can be a great help in removing smaller pests from your home, the webs that spiders make to catch their prey are definitely unsightly.  Another reason to keep spiders out of your home is that they bite, but it’s comforting to know that only a small percentage of bites cause necrotic skin lesions. Still, some spider bites can cause severe reactions in people with sensitivities and compromised immune systems.

While your first instinct is likely to eliminate spiders from your home, you might want to reconsider. Spiders are natural predators to more problematic pests like cockroaches, earwigs, flies, mosquitoes, and moths and can catch these creatures in their webs before they become a larger problem in your home. In North America, homeowners tend to find three common spiders in their homes.

Cellar spiders or “daddy-long-legs” have long legs along with short or long bodies. These spiders are commonly found in basements and attics, which are often dark and left undisturbed for long periods. Cellar spiders prefer damp areas, so they are also commonly found around pipes.

Cellar spiders multiply rapidly and leave their webs behind, which can create an unwanted mess, but these webs effectively catch other pests. The nice thing about cellar spiders is that their jaws are too small to bite humans, meaning they can feed on and eliminate pests while posing no threat to you or your family.

The cobweb spider is a small brown spider that you might see in the corners of your home. Unlike cellar spiders, they prefer dry, protected areas. The cobweb spider spins webs and reproduces quickly, but is generally harmless. However, if you try to kill one, it might bite. This type of spider eats roaches, flies, and other unwanted bugs, but they look intimidating, so your first thought might be to kill one should you see it.

Of all common household spiders, the brown recluse spider is the most dangerous. You can identify them by a violin-like marking on their backs and their distinctive six eyes. This venomous spider is about the size of a quarter, and its bites can be necrotic, so you should seek medical attention if you think one has bitten you. Brown recluse spiders usually hunt for insects at night and prepare their webs for egg sacs during the day. They don’t spin webs to catch food.

Should I Kill Spiders In My House?

If you see a spider in your home, consider letting it live. Many common spiders are harmless and helpful, as they prey on flies and mosquitoes. While most spiders do not spread disease, the pests they catch do. However, if you are concerned that you have a venomous spider like a brown recluse or black widow in your home, contact a professional to take care of them.

For some, spiders are unwelcome guests, no matter how harmless they are. Unfortunately, they can be a bit of a nuisance to catch and release outside, so killing them may be the only effective solution, especially if you have arachnophobia.

On top of that, if you have too many spiders in your home, they might start to attract spider-killing pests like centipedes, scorpions, and other, larger spiders. These spider predators become a bigger, more dangerous problem in the long run, so killing the spiders you see can help to prevent any further headache.

Keep Spiders Out From the Start

Rather than constantly battling spiders in your home, you can take steps to keep them out of your home.

The first step is to clean up the exterior of your home. Plants, piles of leaves, and other debris along the foundation of your house and around your property are an inviting environment for spiders. They have a knack for getting into the debris or into the cracks around your foundation, especially when temperatures drop.

After you’ve cleaned up the debris around your house, look for any small openings around the foundation, doors, and windows that may allow spiders and other pests into your home. You can’t keep everything out, but if you tighten up the weak spots, you can reduce the number of spiders and insects that get into your home.

Inside, develop a cleaning schedule that includes vacuuming and dusting. By regularly dusting, you’ll take away one of their most trusty hiding methods. Use a shop vac to clean your basement, especially in the space where the ceiling and walls meet as spiders tend to make their webs there.

Spiders do not like certain strong scents, like vinegar and peppermint. If you spray a mixture of white vinegar and water in the cracks or apply peppermint essential oil, spiders will stay away from those open areas in your home.

If you just can’t coexist with spiders in your home, you can use a few tried-and-true methods to kill them instantly.

Spray with an Insecticide

When areas in or around your home are overrun with spiders, you can spray those areas with an insecticide. These mixtures kill insects at all stages of life. Spray your doorways and windows regularly, as well as the areas where they’ve built webs and nests. If you have small children, it is important to avoid spraying insecticides where they play or sleep.

Some people prefer to deal with spiders as soon as they see them. You can grab one with a tissue and squish it, or smash one with a shoe. This is a quick method that works, but it does force you to get within arm’s reach of the spider.

Pest control bombs let you kill several unwanted pests in a large area. If you choose to use a fogger or a bomb, you have to close up your home and stay away until the fogger has done its job. The bomb will spray an insecticide into the air, and as the insecticide settles, it kills the unwanted pests. If you have pets, keep them away from the space until you are certain it is safe for them to enter.

Vacuum Up the Spider

A strong vacuum can kill spiders and their egg sacs. Remember that you have to empty the vacuum right away, so consider using one with easy-to-remove vacuum bags.

How to Safely Get Rid of Spiders For Good

To get spiders out for good, you’ll have to prevent them from getting into your home. As a start, you could prepare your home for spider season and remove their food sources. Keep your basement and attic clean and sealed, so they don’t become spider shelters, and keep the inside and outside of your home neat and tidy. You can also apply a spider repellant around your home to force them to go elsewhere.

You can avoid having to kill them by catching them and releasing them outside. Some people catch them with jars so that they don’t have to touch them. Spraying a diluted vinegar solution around your home also keeps them away without having to kill them.

What Not to Do

Safety is the keyword, and some spider-removal methods can be dangerous. In particular, spider poison can be toxic to humans, pets, and other harmless creatures. Spider traps can also be problematic. When spiders get stuck on them, their distress can trigger other creatures to attack them. You could end up with more dangerous pests in your spider traps, putting you in a situation where you have to deal with those as well.

When spiders are running rampant in your home, the best method for removal and prevention is to call a professional. Call Romney Pest Control today for help removing your unwanted spiders safely and effectively!