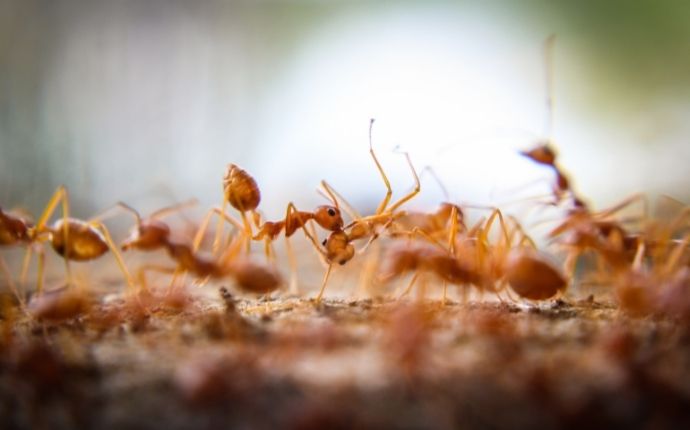 Despite their small size, fire ants can cause big problems. These tiny terrors build large hills that can wreak havoc on local landscapes and ecosystems. Even worse, fire ants often become aggressive when disturbed, stinging and biting anyone they perceive as a threat.

The most obvious sign of fire ants is the presence of their mounds, which look like piles of dirt with no hole in the top.

Removing fire ants by yourself can be dangerous. Before you take any action, check out the guide below to learn more about how they live and what removal methods work best. Alternatively, call the San Antonio pest control experts at Romney Pest Control and we’ll do it for you.

The first step in removing fire ants is understanding some basics about their biology and history.

Why Are Fire Ants a Problem?

The Red Imported Fire Ant isn’t native to the United States. They first entered the country in the 1930s and 40s in soil shipments from South America. Today, they’re found primarily in the Southeastern US, with limited distributions in California, New Mexico, and Arizona.

How to Locate and Identify Fire Ants

Fire ants vary in size, but the easiest way to distinguish them from other types of ant is by their dull red coloration. They also have elbow-shaped antennae and a prominent stinger.

Fire ant mounds look like loose piles of sand or dirt. The top of the mound is either flat or domed, but won’t have any visible entrance. Individual mounds located on grass lawns only stand a few inches tall, but fire ant hills with a dirt foundation can grow over a foot in height.

Instead of entering and exiting the mound from a top entrance, fire ants build extensive networks of underground tunnels up to ten feet deep.

Getting Rid of Fire Ants

Fire ants have several characteristics that help them withstand a variety of removal methods.

Why Is It Difficult to Get Rid of Fire Ants?

If fire ants sense danger, they’ll attack. A full swarm of fire ant stings can cause serious injury to a fully-grown adult, which is why you should never attempt to remove a colony by yourself.

The most important member of any fire ant colony is the queen. They’re the only ant in a colony capable of laying eggs. Unless the queen is killed or relocated, any damage done to an anthill is only temporary since the queen will continue to reproduce.

The size of a fire ant colony complicates removal efforts. The elaborate network of tunnels offers plenty of opportunities for the ants to retreat and hide when removal methods target the mound.

How Can You Get Rid of Fire Ants?

Several home products can be used to assist in eliminating fire ants. Common DIY techniques include:

Aside from natural methods, more lethal options are also available:

While homemade methods help reduce the fire ant population, they typically aren’t strong enough to permanently destroy the entire colony. Professional exterminators understand how to target the queen and completely remove the insects.

To learn more about removing fire ants and to get a free quote, contact Romney Pest Control today. Our specialized team is ready to help!