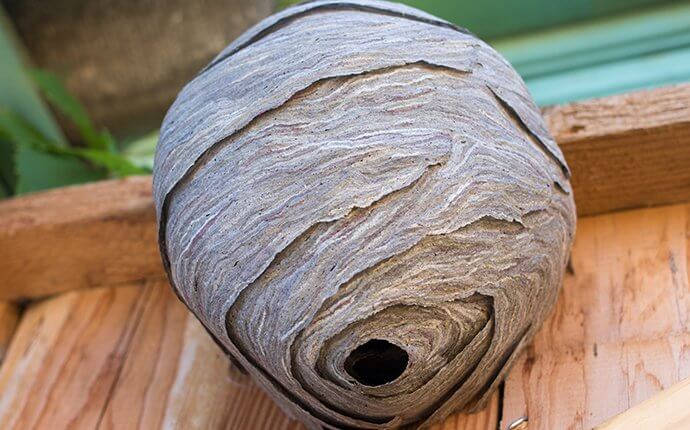 Stinging insects of all stripes are potentially dangerous, especially for those who are allergic. But aggressive and territorial hornets are some of the worst pests to have to deal with on your property. Improper handling of a nest can lead to a dangerous swarm of stinging insects, and completely eradicating these resilient predators is a tall order. Knowing how to spot the early signs of an infestation, and why you should turn to the professionals for safe removal, may just save you from an emergency.

Common Hornets In The Area

Hornets are the largest variety of stinging insect, a term that includes many species of bees and yellow jackets as well. Aside from their size, common hornets in our neck of the woods are the bald-faced hornet, a black variety of wasp that lacks the furry features of bees.

While many species of stinging insect have similar coloration and markings, hornets have unique features that make them some of the most formidable stinging insects around:

Unlike bees, hornets are capable of stinging numerous times without dying. This makes them more aggressive and willing to attack than other, more docile wasps.

Hornet nests are massive, much bigger than the typical bee or yellow jacket nest. Unlike the waxy material of a honeycomb, hornets make papery nests.

Unlike pollinating wasps like bees, hornets don’t solely eat pollen. Rather, these flying predators are near the top of the insect food chain, preying on many varieties of smaller bugs.

Where Do You Encounter Hornet Nests?

Hornets, like other stinging wasps, form colonies to divide up the tasks of building a nest. Reproductive queens scope out safe areas for a new nest each year. Worker hornets set about building up the nest and finding sources of food to bring back. Once a nest is in place, the queens quickly set about producing hundreds of offspring, and as newly mature queens are bred, this proliferation can multiply. Hornet nests are often found along overgrown tree limbs, within bushes or in the corners of roofs and gutters.

The Dangers Of Going It Alone

Hornet infestations aren’t like other pest populations. You shouldn’t try to disturb or scope out their territory, and at-home methods often do nothing to solve the problem — only succeeding in putting you in harm’s way. It is always best to turn to the experts for proper pest control, but it’s even more important with dangerous stinging insects.

All of the following are ineffective and potentially dangerous ways that people often attempt to get rid of hornet nests (and we strongly advise against trying them):

Whether using a broom or other long instrument, people often try to whack or push nests off of their perches. This is a great way to get stung and a terrible way of getting rid of hornets, which can easily find another spot to nest.

Don’t let the pyromaniac in your family talk you into taking a torch or flame to a nest. The nests themselves are very flammable, causing fire to quickly spread and creating a far worse (and highly illegal) problem.

Less of a method in and of itself and more of a cautionary note, another big reason people hurt themselves is that they assume that an inactive nest is hornet-free. In reality, some old nests can still house live hornets, ready to sting if provoked.

Safe & Proper Protection From The Pros

When it comes to stinging insects like hornets, the best thing you can do is turn to the experts early. Improper methods can not only put you in harm’s way, they can simply worsen the problem. At Romney Pest Control, you can rely on our experienced technicians to safely and quickly remove dangerous nests from your property. Not only that, but our friendly staff can also provide you with more prevention tips and put in place treatments that will ensure hornets never invade again.