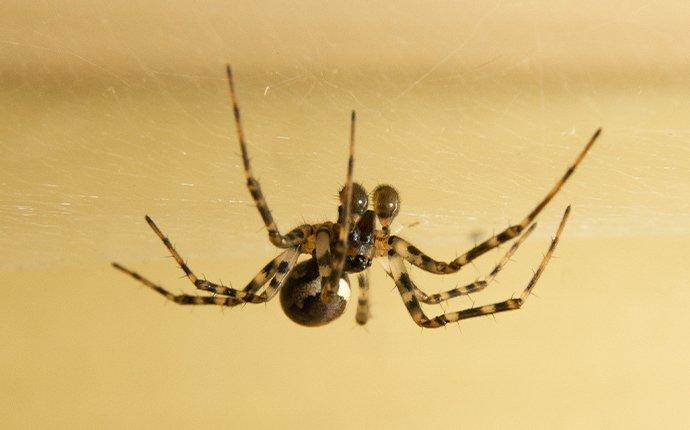 If you’re seeing more spiders than usual, the first thing it means is that you have a higher risk for all the problems that come with having spiders around and inside your home. Let’s take a moment to talk about the risks, answer a few questions, and discuss how to reduce the spiders around your Dallas/Fort Worth home.

How can you tell a poisonous spider? There are only two kinds of spiders in Texas that are considered poisonous: the black widow spider and the brown recluse spider. Both of these spiders have a distinct appearance. If you see a hairless black spider, it is likely that you’re looking at a black widow. If you see a visually hairless brown spider that has a dark brown fiddle marking on its back, you’re looking at a brown recluse.

Are poisonous spiders common? Black widows are accidental invaders that prefer to be outside. Brown recluses are not. Brown recluse spiders can do quite well inside a home and populations can grow into the hundreds of thousands.

What problems come with having spiders? Obviously, bites are the first concern. These bites often happen at night when a spider crawls around your home. It doesn’t pay much attention to you until it is on your skin and your skin twitches. Most of the time, spiders are just annoying. They leave webs everywhere and they’re creepy to have around.

How To Reduce Spiders

If you’re seeing more spiders than usual, there are several reasons why this might be. Understanding these factors can help you reduce the spider populations near your home and reduce the number of spiders that get into your home.

Webs
It can be annoying when spiders create webs in your landscaping vegetation or on the side of your home, but those webs are more than just an eyesore. If you don’t periodically remove the webs, the eggs inside can turn into hundreds of spiderlings near your home.

Overgrowth
It is easy to let the vegetation around your home get a little too long. When this happens, you usually deal with that overgrowth because you care about your curb appeal. But removing overgrowth and keeping things neat around your home can reduce spiders because it helps to reduce the pests that spiders eat.

Moisture
Damp areas are pest magnets. There are many bugs that prefer cool, damp, shaded places. When you work to reduce moisture and the conditions that promote moisture, you reduce moisture pests and the spiders that eat them.

Clutter
Spiders love to establish their webs in lawn clutter. If you have clutter near your home, it can bring spiders in close to your home.

Lights
Many insects are drawn to light. Spiders know this and establish their webs near light fixtures. Keeping lights off at night or replacing white bulbs with yellow insect-resistant bulbs can reduce insects and spiders.

How To Control Spiders

If you’re seeing more spiders than usual it means that it is a good idea to reach out to Romney Pest Control. With ongoing residential pest control for the exterior of your Dallas/Fort Worth home, you can reduce the bugs that spiders eat and get direct control of spiders with routine web removal. Reach out to us today to start your service.