Home > Blog > How To Keep Wolf Spiders Away: Protecting Your Home From These Pests

How To Keep Wolf Spiders Away: Protecting Your Home From These Pests 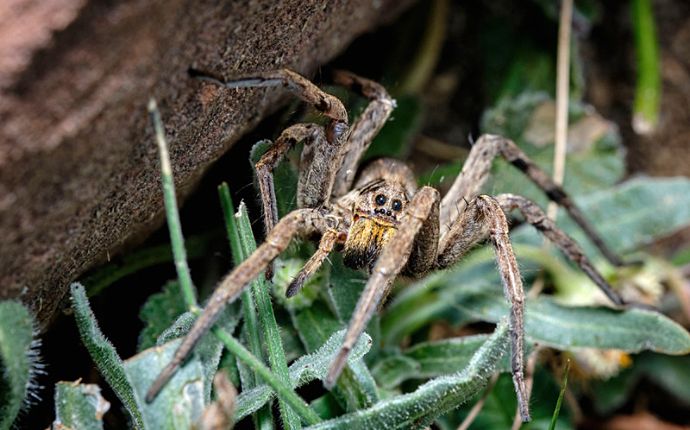 Wolf spiders look intimidating, although they aren’t much of a threat, especially when compared to black widow spiders and other types of spiders. Despite the limited danger, species of wolf spiders do bite. Baby wolf spider bites feel like bee stings.

This species succeeds in various environments because they are resilient and adaptable. If you worry about wolf spiders in your home, the experts at Romney Pest Control can help you. Our pest control experts can help you prevent wolf spiders from entering your home.

Female wolf spiders measure up to two inches in length, while the smallest are ¼-inch long. They are grayish-brown with a distinctive light brown stripe pattern on their backs. They have eight eyes and eight hairy long, light-brown legs.

Wolf spiders don’t build webs. Instead, they chase after their prey, as wolves do. They live everywhere, from grasslands, meadows, deserts, and rainforests. They live wherever they can find other insects to eat. These spiders chase their prey on the ground, and some will burrow into the ground. They hunt most often at night.

When the weather gets cold, wolf spiders look for warm places to live. Sometimes those places are homes, especially garages, basements, and windowsills. They rely on their eyesight to make it through the world, but they cannot move their eyes. Wolf spiders must move their bodies to see peripherally.

Once the females lay eggs, they wrap them into an egg sac and carry the eggs on their spinnerets. Female wolf spiders carrying egg sacs can be aggressive as they work hard to protect them. The females protect their hatchlings, who ride around on her back for several days after hatching.

Wolf spiders might look dangerous, but they aren’t. They bite if they feel threatened, and the bite stings and leaves a red mark, but it isn’t a deadly or dangerous bite.

If you are bitten by a wolf spider, it’s best to use an ice pack for relief. Anti-itch ointment and anti-inflammatory over-the-counter medication help relieve the swelling and itching. The bite might hurt when it happens, but the pain goes away after a few minutes. The bite can swell, but it resolves in a day or two. The itchy sensation lasts the longest.

How to Keep Wolf Spiders Away

No one wants to have wolf spiders move into their homes. They are aggressive arachnids that look frightening, especially to people who fear spiders. It is possible to keep them from entering your home with a few simple steps.

Close Off and Seal Up Entry Points

When the temperatures drop, wolf spiders look for warm places to live. They’ll enter your home through gaps in the windows and doors and holes in screens. They can squeeze through crevices in your home’s foundation and siding.

They’ll build their homes in basement crawl spaces, especially if your home has outdoor vents or utility wires that provide easy access. You can seal the points with expandable caulking so they cannot squeeze into holes and openings.

Because boric acid is deadly to spiders, you can also prevent them from moving into your home by sprinkling it around your home and in openings.

Before they move into homes, wolf spiders burrow in the ground near them. So they stay away from your home, you can build a barrier by spreading commercially-bought insecticides. Spread the insecticides around the perimeter of your home.

Make sure the barrier is about four inches wide near your indoor perimeter and about 12-inches wide around the exterior of your home. Wolf spiders will be less likely to cross the barrier and enter your home.

To prevent wolf spiders from getting comfortable in your home, keep things clean with routine sweeping and vacuuming. They like quiet spaces, which is why they won’t make their homes where people sweep and vacuum. Since they move into basements, vacuum and sweep at least once per month to disrupt them and get them to stay away.

Wolf spiders will make their nests in quiet places where they can hide. They hide in clutter, especially old boxes, piles of clothing, and newspapers. Remove clutter so they cannot build nests in it. If you see webs, remove them. Watch for other webs to pop up in other places, as spiders are resilient. Remove outdoor hiding spots like leaf litter and piles of leaves.

You can take steps to keep wolf spiders out of your home with simple household chores. It is important to vacuum and dust regularly so spiders cannot hide or get comfortable. Homeowners should remove clutter, especially cardboard boxes. If you want to keep spiders out of your belongings, put them in air-tight plastic totes.

Outside of your home, you can keep spiders away by clearing weedy areas from around your home. When you trim away vegetation, spiders cannot hide near your home’s foundation. Since spiders like to hide in firewood, keep the stack away from your home and out of your garage. You should also keep yard debris and building materials away from your home.

Since wolf spiders are nocturnal, they hunt at night. You can install outdoor lights with warm light, like sodium vapor lights, to make them less likely to move into your home. Warm lighting also keeps other insects away, so spiders will not find food sources near your home.

If you find wolf spiders in your home, you can remove them by setting traps for them. Mouse glue boards and spider glue boards are useful choices because spiders walk on them and get stuck. Then, you can throw away the trap or let the spider die on it.

To catch spiders, put the traps in basement and garage corners, under furniture, and near doors. It’s a good idea to keep children and pets away from the traps.

While you might want to catch a wolf spider in a container, it isn’t a good idea. Wolf spiders have long metabolisms, so they can survive under a container for a long time. If you do catch one in a container, take the container outside, but be careful as the spider could bite.

Boric acid is a particularly helpful product for repelling wolf spiders. The substance does not harm humans, but it does kill spiders. The dusty acid is abrasive, so it scratches through spider exoskeletons and can kill them. If they eat it, it kills them quickly.

If you prefer to kill them with a spider-specific insecticide, the key is to spray where spiders go. Spray the insecticide in cracks and fissures in the walls where spiders enter and exit your home.

Many spider sprays leave a residue that spiders bring back to their nests. If you spray near other insects, under eaves, on your porch, in your garage, you’ll reach the spiders and kill them quickly.

Along with boric acid, other natural repellents safely keep wolf spiders away. Many essential oils and natural herbs keep spiders away. They don’t like the cedar, cinnamon, citrus, peppermint, and tea tree fragrances. Fill a BPA-free bottle with peppermint oil to repel spiders, ants, and other bugs.

Wolf spiders do not like diatomaceous earth. The white powder sticks to insects. Then they become dehydrated and die. Diatomaceous earth occurs naturally and is safe to have around children and pets.

You can also plant spider-repelling plants around your home. Spiders do not like strong fragrances, especially eucalyptus, lavender, and lemongrass plants. Natural peppermint keeps them away, too.

Here’s Why You Shouldn’t Squish a Wolf Spider

The worst thing you can do with a wolf spider is to squish it. If you step on a female spider, you could release the eggs or hatchlings from her back and get swarmed with hundreds of babies. You might think you are effectively killing one spider, but having hundreds of tiny ones roaming around your home makes pest removal more challenging.

If you find wolf spiders in your home, the best way to remove them is by hiring pest control experts. At Romney Pest Control, we service Dallas-Fort Worth, Houston, San Antonio, and Austin, Texas. Contact the team today to prevent wolf spiders from entering your home and remove them if you already have a wolf spider infestation.