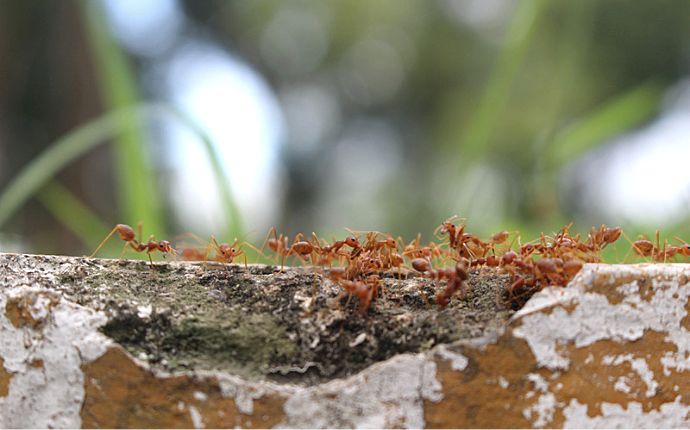 Fire ants are among the most troublesome of all ant species. They’re aggressive and have a painful sting and bite that can lead to uncomfortable reactions.

Having a fire ant infestation limits your ability to enjoy your property to its fullest. Fire ants are common, especially in Houston, frustrating pests that are difficult to manage once they establish a colony.

Here’s what you need to know about controlling fire ants in your Houston lawn, and tips to keep them out for good.

All About Fire Ants

Let’s start with a few facts about these troublesome pests.

What Are Fire Ants?

Fire ants are tiny, only about ¼ of an inch in length at the longest. They have a distinctive red color to their long, ovular body and a visible stinger on their latter half. Some fire ant species have wings, which can make it difficult to distinguish them from other pests. Still, they always retain the same identifying coloration and shape.

Fire ants nest similarly to other ant species, except their hills do not have an entrance hole in the top. Workers will build large, central “hills” – sometimes up to 18 inches tall. They have underground structures to house their food, eggs, and queen. The queen will usually remain inside the colony unless it is moving or she has died, at which point a new queen will emerge.

Fire ant mounds tend to emerge after rainfall when water is abundant. In times of drought, their colonies depend much more on underground networks to find water.

Fire ants have strong mandibles whose bite can hurt severely and a stinger with a painful venom called piperidine. It can induce symptoms such as swelling, redness, irritation, and in some cases, serious allergic reactions. The itching caused by the bites alone can lead to secondary irritation that can go on for days.

These ants attack when they feel threatened. So, if you were to disturb a fire ant colony, you could be swarmed by them and end up with many painful bites and stings.

Fire ants are most active in warm temperatures, between 70 and 90 degrees Fahrenheit. They prefer the outdoors but may come inside in search of better nesting grounds, food, or water.

How Difficult Is It to Get Rid of Fire Ants?

Unlike many other species of ant, fire ant colonies can have more than one queen. One of the only ways to eliminate an ant colony is to dispose of the queen. Being unable to locate all of the queens in a colony can cause re-infestations at a much higher rate.

There are some things you can do yourself to remove ants from your property. The most common method is to “bait and drench.” This involves using poisoned bait to kill the queens, then drenching the entire mound in insecticide. These methods can be toxic to pets and children, so be careful when applying them.

You should never use any kind of explosive or firework to eliminate an anthill, as this can cause property damage and personal injury. You should also avoid hot water, gasoline, and fire drenching for the same reason. These methods are also ineffective at removing lower nesting tunnel activity.

The best way to get rid of fire ants is to prevent them from entering in the first place. To do that, you’ll want to control food and water sources, as well as any potential entrances.

To control food sources, you should keep your home free of food mess. Clean up after any spills occur and create a routine of mopping, sweeping, and vacuuming. You’ll also want to control their access to the trash. Use tight-fitting lids on trash cans and empty them regularly.

Prevent moisture by installing or repairing weatherstripping on doors and windows. Screens can also be effective at keeping ants out if properly maintained. Be sure to seal up any cracks and holes in your home’s exterior foundations to prevent leaks and pooling water.

Control Houston Fire Ants and Keep Them Out

Sometimes, even with all efforts to keep them away, fire ants can find their way onto your property. If you’re having ongoing issues with them, contact Romney Pest Control. Our expert Houston, TX exterminators are happy to help you eliminate fire ant nests and keep them out for good.