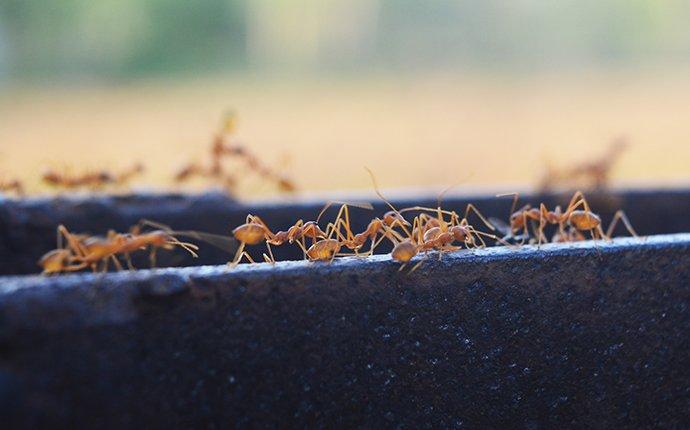 If you’ve spent any time outside in Fort Worth, you’ve probably experienced a fire ant sting. The ants are everywhere, and they make their presence known with a painful sting. While you might be aware of the pain that comes from a fire ant encounter, do you realize how dangerous this common pest can be? Learn more about the dangers of fire ants.

What Are Fire Ants?

Fire ants are one of the more common types of ants in Fort Worth, small red and black pests that like to live in large colonies. Although they’re not originally from the U.S, they came over in the 1930s. They traveled from South American ships to the port in Mobile, Alabama. In only a short time, fire ants spread across the country.

Fire ants differ from most other local ants in their stinger and venom. While local ants may bite in self-defense, fire ants bite and then inject their target with a venom stinger on their abdomen. For this reason, you are most likely to identify a fire ant by its sting instead of its appearance.

What Happens When A Fire Ant Stings You

It’s difficult to say how you will react to a fire ant sting. This is because some people have allergic reactions to fire ants; if you’re allergic to the venom, you could face severe consequences. For some individuals, all it takes is one fire ant sting to result in anaphylaxis. If you experience any of the following after a bite, you’re having an allergic reaction and need medical attention:

For others, a fire ant sting is less dire: the sting often produces a burning pain that turns into an itchy, pus-filled bump, but isn’t fatal. But you’re unlikely to get away with only one fire ant sting. These Fort Worth pests sting repeatedly, and the others in the colony might join in. When they see you as a threat, fire ants attack in large numbers. It’s documented that some individuals experience hallucinations after being attacked by fire ants.

Why They’re So Dangerous

One of the dangers of fire ants is their ability to cause allergic reactions. The other danger comes from the fact that it’s so easy to unknowingly step on a mound. Fire ants form huge colonies with multiple queens. If you have fire ants in your yard, it’s almost impossible not to step on a nest; your children or guests are likely to step on one and suffer the consequences.

These large nests are also what makes it so difficult to remove fire ants. Once they disperse, fire ants don’t want long to take over. They can even take over local ant species. On your own, there’s not much you can do to eliminate fire ants. If you get rid of one colony, another one will soon take its place.

How To Handle An Infestation

Due to the dangerous nature of fire ant infestations, it’s crucial to contact professionals. Before someone gets hurt, you should contact a pest control expert. DIY techniques just don’t get the job done, and over-the-counter products aren’t effective at removing whole infestations. When used correctly, the products may be harmful to your health.

Here at Romney Pest Control, we want your property to be a safe place. That’s why we work hard to handle your fire ant infestation efficiently. In addition to removing fire ants from your property, we can ensure that they don’t ever return. If you have an issue with fire ants or need advice, give us a call today.