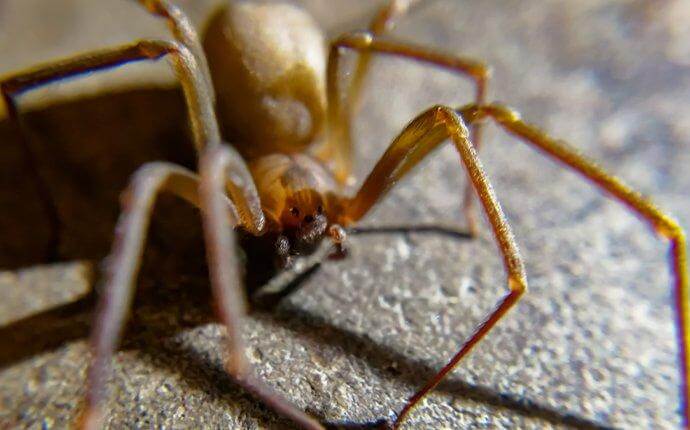 Where Do Brown Recluse Spiders Hide?

Unlike other species of spiders, the brown recluse doesn’t use its web to catch insects; instead, they use it as a retreat. While most spiders build the widely known spiral web, brown recluse spider webs are irregular, loosely constructed, and made in undisturbed locations. When brown recluse spiders invade your Houston home, they will build their webs in attics, wall spaces, closets, or even in an unused pair of shoes.

How Dangerous Are Brown Recluse Spiders?

Brown recluse spiders are one of the most dangerous spiders in the United States. These small arachnids have potent venom that causes the death of cells or tissue—incredibly harmful to your health. Initially, bites from these spiders often go unnoticed because they are relatively painless. After a few hours, a red ring or bull’s eye mark may appear around the site of the bite. Some symptoms that can follow a brown recluse bite include chills, fever, joint pain, nausea, weakness, and pain or redness around the bite site. In extreme cases, an ulcer may form, leading to severe scarring and deep tissue damage if you don’t seek medical attention. Severe brown recluse bites are not common, and death from these bites are rare.

Keeping other pest populations around your Houston property down can significantly reduce the number of spiders that take up residence on your property. All spiders will follow their primary food source—insects. To keep spiders away from your home, consider these spider prevention tips:

If you think you have a brown recluse spider bite, it is vital to seek medical attention immediately to avoid potential ulcers or other serious health problems. You should leave the removal of spider infestations to the professionals. At Romney Pest Control, we have several years of experience dealing with pest problems. You can trust us to keep your Houston home pest-free for years to come. Reach out to our pest professionals today for more information about all of our effective pest control solutions.